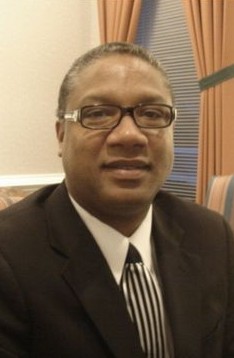 Harry E. Reid, Jr., son of Harry and Harriett Reid, was born in Indianapolis, Indiana on June 20, 1957. Harry was educated in the school systems of Indiana, Washington, DC and Newport News, Virginia where he graduated form Menchville High School in 1974. Upon completing high school, Harry attended Virginia State University where he graduated in 1980 with a B.S. degree in Health and Physical Education.

After working several years in the field of education, Harry completed his apprenticeship at O. H. Smith and Son Funeral Home in Newport News, Virginia. He then enrolled at John Tyler Community College where he received his Associate of Applied Science in Funeral Service. Harry graduated with honors in 1986. His fraternal affiliations are Kappa Alpha Psi Fraternity, Inc. and King David Lodge No. 28. He is a member of the Virginia Morticians Association and a member of Ebenezer Baptist Church.

Harry has been employed since 2004 as a Funeral Director and Embalmer at Scott’s Funeral Home.